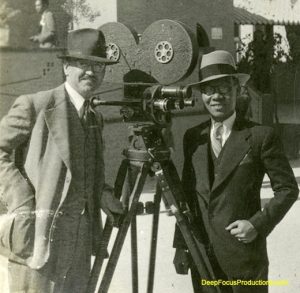 From left: Clifton Skinner and Joseph Sunn Jue on location at The Golden Gate International Exposition on Treasure Island for the film, Light of Overseas Chinese 華僑之光 (ca. 1940).

Clifton Skinner 史堅拿, a pioneer San Francisco-based audio engineer, had a decades-long collaboration with Joseph Sunn Jue and Grandview Films. In 1933, he teamed with Jue as sound recordist and film developer on Grandview’s inaugural film Blossom Time 歌侶情潮, one of the first Cantonese talkies, which was made in San Francisco Chinatown. Their association and friendship continued overseas in Hong Kong, and back to America until the late 1950s.

Please check back for new information as we develop this story and content for Grandview Films: Cinematic Crossings with Joseph Sunn Jue.