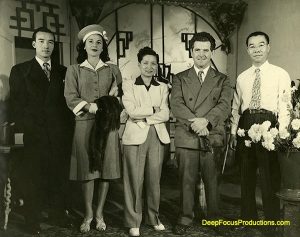 Born and raised in San Francisco, Esther Eng 伍錦霞 was a producer, director, and writer of Chinese language films for the global Chinese diaspora. Among her movies were features for Grandview Films, made for both their San Francisco and Hong Kong studios. An open lesbian, radical for her time, Eng cast Bruce Lee in his screen debut in Golden Gate Girl 金門女 (1941), which was photographed by Joseph Sunn Jue.

Please check back as we develop this story for Grandview Films: Cinematic Crossings with Joseph Sunn Jue. For an introduction to Esther Eng, see chapter eleven of Arthur Dong’s Hollywood Chinese: The Chinese in American Feature Films.