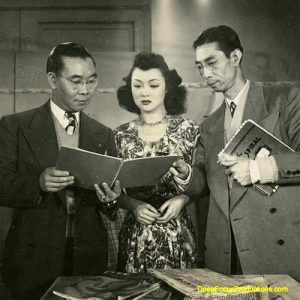 Marianne Quon/Lai Yee 麗兒 was a child when she first appeared on screen, in Grandview Film’s Blossom Time 歌侶情潮 (1933) about Cantonese opera perfomers. After a few Hollywood films, including Charlie Chan in the Secret Service (1944) and China (1943), Quon resumed her career with Grandview at both their San Francisco and Hong Kong studios. She became a leading player in the Cantonese film industry and garnered the moniker, “Color Queen”, for having produced and acted in a number of color movies in the 1950s.

Please check back as we develop this story for Grandview Films: Cinematic Crossings with Joseph Sunn Jue. For an introduction to Marianne Quon, see chapter six of Arthur Dong’s Hollywood Chinese: The Chinese in American Feature Films.