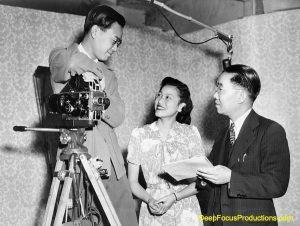 In the early 1940s, Honolulu native Patricia Joe/Chow Kwun-Ling 周坤玲 was working as a secretary at Hartford Insurance in San Francisco. She was also a part-time cashier at Joseph Sunn Jue’s movie theater in San Francisco Chinatown when Jue launched her movie career — she was cast in eight of his Grandview Films productions, some opposite Wong Chiu-Mo 黃超武, whom she eventually wed.

After World War II, the couple traveled to Hong Kong and became screen legends of Cantonese language movies. They eventually re-settled in San Francisco in the 1960s where they ran a restaurant and were active in Cantonese opera.

Please check back for new information as we develop this story and content for Grandview Films: Cinematic Crossings with Joseph Sunn Jue.