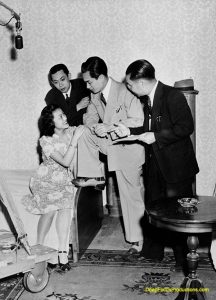 An accomplished Cantonese opera performer, Wong Chiu-Mo 黃超武 was touring America in a troupe, that included Wong Hok-Sing 黃鶴聲, when the Sino-Japanese war prevented them from returning to Hong Kong. Fortunately, the stranded actors found work at Grandview Films’ San Francisco studio. Not only was Wong Chiu-Mo able to score a screen debut, but he also met his future wife, actress Patricia Joe/Chow Kwun-Ling 周坤玲, his co-star in several Grandview movies.

After World War II ended, the newlyweds traveled to Hong Kong where their movie careers soared. Besides contemporary film roles, Wong advocated the art of Cantonese opera, both in movies and on stage. In his later years, back in America, he was devoted to the Baht Wo Association 美西八和會館 in San Francisco Chinatown to help promote Cantonese opera and the well-being of its performers in the US.