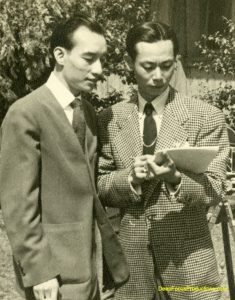 The Sino-Japanese War escalated while Wong Hok-Sing 黃鶴聲 was touring America with a Cantonese opera troupe, which included fellow actor Wong Chiu-Mo 黃超武. The conflict prevented the two from returning to Hong Kong and left them stranded in San Francisco. Fortunately, Joseph Sunn Jue hired the actors to star in a series of Grandview Films’ local productions.

During that time, Wong Hok-Sing joined the US Air Force, became a citizen, and was tapped by Jue for his directorial debut. After directing six Grandview feature films, he went to Hong Kong after the war to become a prolific director, amassing over 200 credits in twenty years. He simultaneously acted and served as screenwriter until his retirement from the film business in 1970. Wong returned to San Francisco where he continued his passion for Cantonese opera until his passing in 1993.