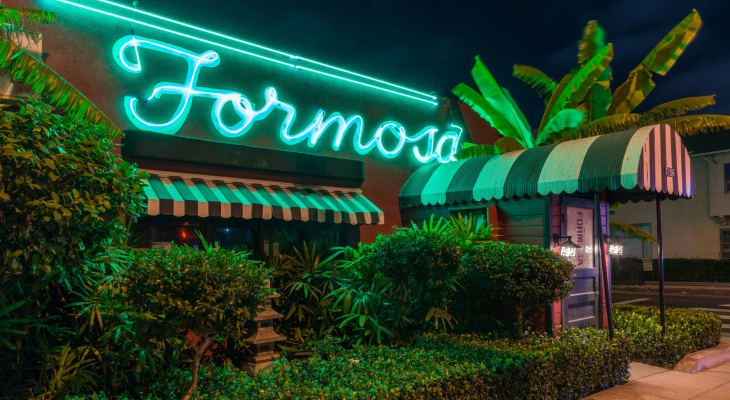 HOLLYWOOD CHINESE at the FORMOSA

View a Gallery of Photos from the Exhibit

HOLLYWOOD CHINESE at THE FORMOSA offers a nostalgic, yet thought-provoking glimpse into cinema’s fascination with the Chinese. Commissioned by the iconic Formosa Cafe as part of their restoration, the exhibit highlights select photos and lobby cards from author and filmmaker Arthur Dong’s collection of movie memorabilia centered on the depiction of the Chinese in American feature films.

Curated by Arthur Dong and designed by Max Shapovalov, the show covers the silent era and up to 1969, which align with the Formosa Cafe’s earlier years and through it’s peak period. Dong adds, “I’ve organized the exhibit into a range of themes and genres, including westerns, crime dramas, and musicals. Together, they chronicle some of the ways Hollywood has constructed the Chinese image and persona, and single out Asian American artists who have contributed to film culture and cinema history.”

Designer Max Shapovalov’s rendering of the “Hollywood Chinese at the Formosa” exhibit under construction.

The venerated Formosa Cafe has long been a destination restaurant and watering hole for celebrities and filmmakers, especially those working in nearby studios. But in December 2016, the 94-year-old eatery unexpectedly closed its doors. Two-and-a-half years later, the Formosa re-opened on June 28, 2019. 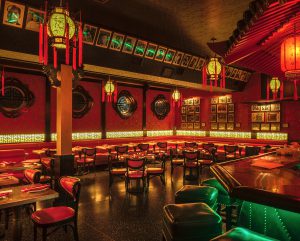 Portions of the “Hollywood Chinese at the Formosa” exhibit as seen in the venue’s dining and bar area. Photo by Max Shapovalov.

Ownership is now under the 1933 Group, who has restored an impressive portfolio of historic bars in Los Angeles, including the Highland Park Bowl, the Idle Hour, and the Harlowe. Upholding the company’s dedication to preservation, the 1933 Group recognizes the Formosa Cafe as “a true Hollywood landmark in the grandest sense” and was careful to “honor every detail in the restoration.” The city of West Hollywood has recently designated the restaurant a local cultural resource.

1933 Group partner Bobby Green said, “The contributions of Chinese Americans to this city as well as Hollywood hasn’t been fully recognized. As a fan of Arthur’s first book Forbidden City, USA, I knew he was the perfect person to showcase the Chinese American influence on early Hollywood, and what better place to tell this story than the beloved Formosa.” 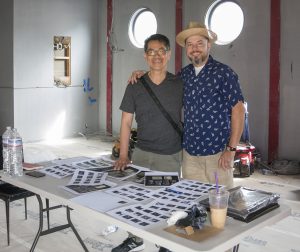 Curator Arthur Dong and 1933 Group partner Bobby Green look over plans for the “Hollywood Chinese at the Formosa” Exhibit. Photo by Max Shapovalov.

HOLLYWOOD CHINESE at THE FORMOSA is mounted in the back bar and dinning area. “It was a creative challenge to design an exhibit on the representation of the Chinese in Hollywood within a restaurant and bar, but the Formosa Cafe is unique in its celebration of movies and the use of Chinese ornamentation, much like Grauman’s Chinese Theatre,” says curator Arthur Dong.

“Overall, my vision was to recognize veteran Asian American film artists who navigated the film industry in the past as a way to underscore their successes today. There’s also a section on the Chinatown nightclubs era in San Francisco that helped launched the careers of actors like Pat Morita and Jack Soo.” Indeed, while viewing the exhibit, visitors can raise a toast to portraits of sixty groundbreaking film, TV, stage and radio performers that adorn the entire span of the room. 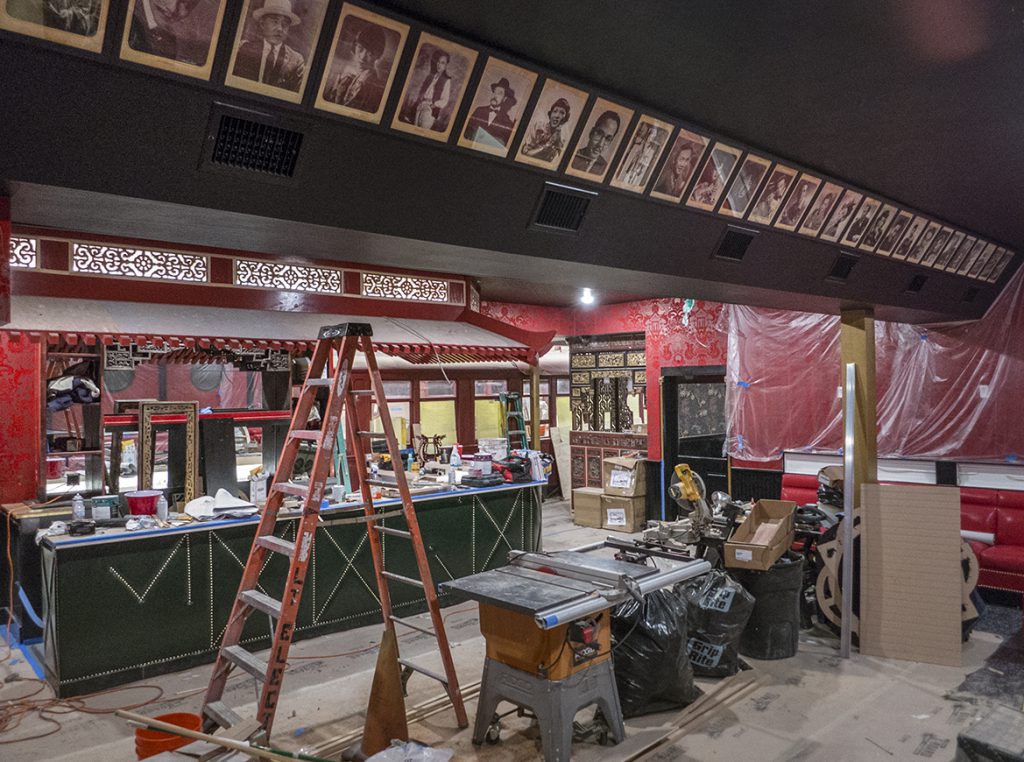 Under constructions, portraits of Asian American entertainers span the room in the “Hollywood Chinese at the Formosa” exhibit. Photo by Max Shapovalov. 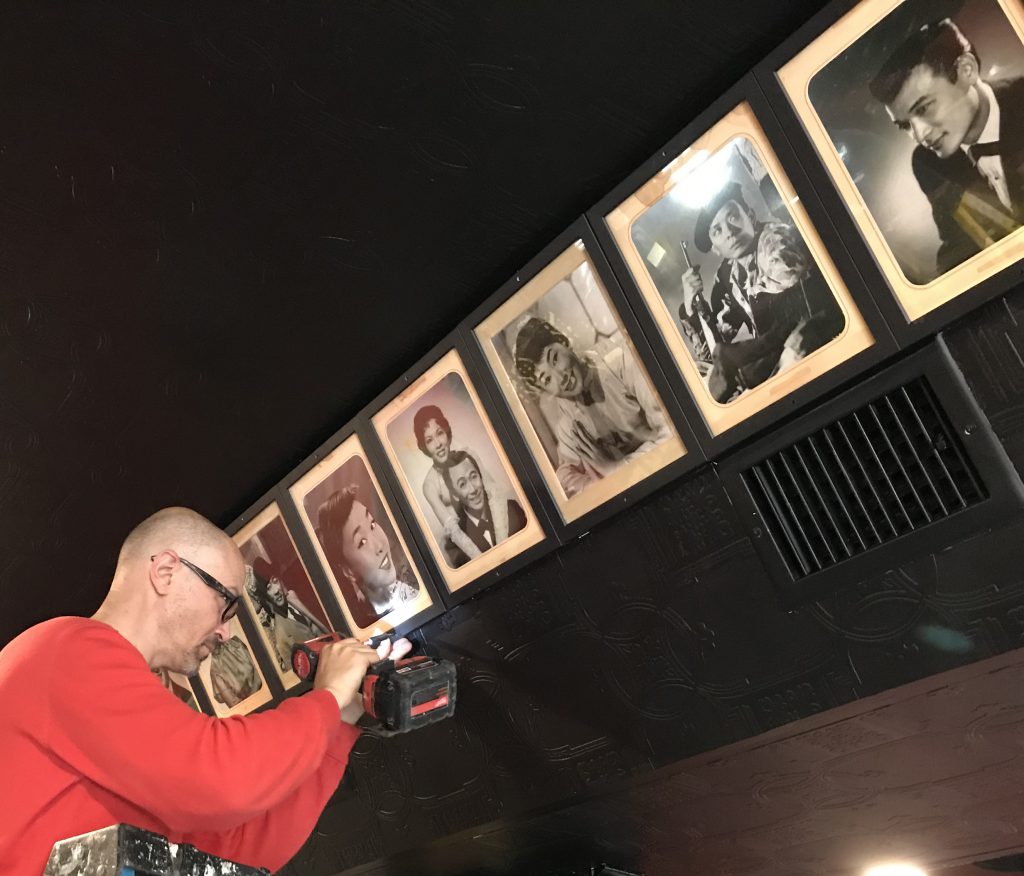 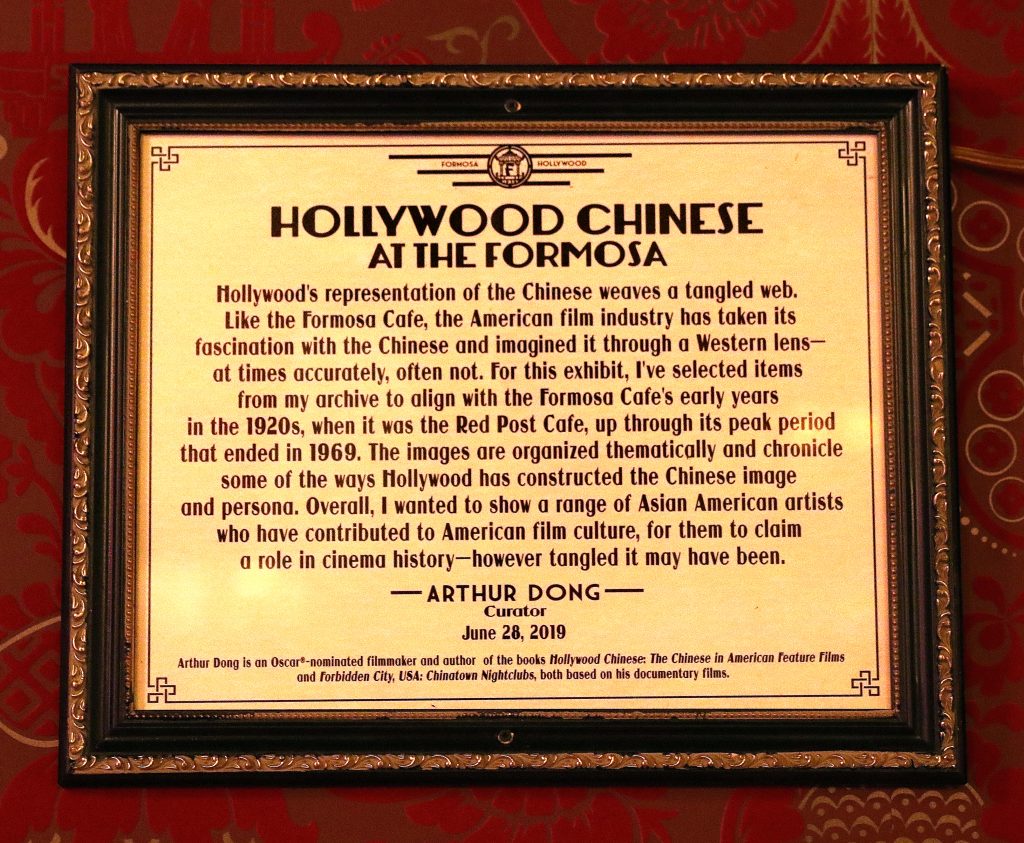 VIEW  A  GALLERY  OF  PHOTOS  FROM  THE  EXHIBIT

“Dong had curated exhibitions in libraries and museums but never a bar. He had to rethink how an exhibition could work in a space where people would be drinking and eating” —LAist

“There are black and white celebrity headshots…but there’s a signficant twist…the 60 photos displayed on a ceiling beam trace a timeline of pioneering Asian American film, TV, stage and radio performers. The timeline was created by Arthur Dong, an Oscar® nominated filmmaker and author.” —Los Angeles

“Dong wanted to convey and honor the history of working Chinese American actors—but without overlooking the notorious stories about Hollywood’s offensive caricatures and the historically common practice of casting white actors in Asian or Asian American roles.” —Preservation Magazine

“Filmmaker Arthur Dong curated this room with images of Chinese-American actors from the 1920s to the 1970s. Dong is working on a book about the influence of Chinese-Americans in old Hollywood, and Formosa Cafe plans to have a book party for him here.” —Food & Wine

“At the back bar, patrons will be able to enjoy the full drink menu plus an exclusive take on Yee Mee Loo’s famous “Blue Drink.” They can also see photos from The Good Earth as part of a Hollywood Chinese exhibition curated by Chinese American film historian, filmmaker, and author Arthur Dong.” –Los Angeles Magazine

Many of images on display in the exhibition are featured in the book Hollywood Chinese: The Chinese in American Feature Films. Additionally, most images that show the Chinatown nightclubs aspects of the exhibition are included in the book Forbidden City, USA: Chinatown Nightclubs, 1936-1970. Activate the links for details and ordering information.