For the first time, digitally re-mastered DVDs of Coming Out Under Fire, Family Fundamentals, and Licensed to Kill are available together in Stories From the War on Homosexuality: The Arthur Dong Collection, Vol. 1. The collection has over 4 hours of additional material and bonus features, including more than 2 hours of previously unreleased footage, viewer guides for each title, and much more. Packaged in a specially designed Collector’s Edition box priced at a savings over individual purchase of each DVD. 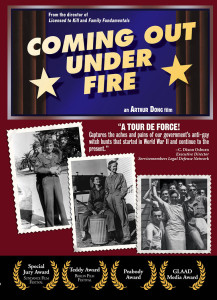 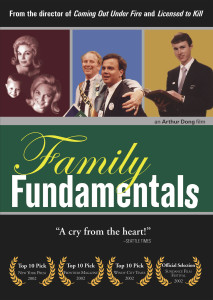 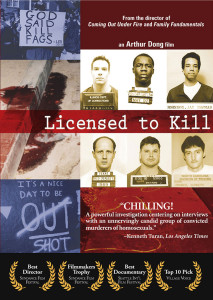 Back jacket introduction: “From one of America’s best documentary filmmakers, Arthur Dong’s collection is a must-have for anyone interested in contemporary storytelling. Like master filmmaker Frederick Wiseman, Dong explores culture and institutions – the military (Coming Out Under Fire), hate violence (Licensed to Kill), and religion (Family Fundamentals) – to dramatically reveal the social consequences of individual actions in America’s 20th century Culture Wars over gay and lesbian issues. With rare insight and intelligence, Dong’s versatility deftly combines the personal and the political to weave passionate forays into the hearts and minds of his subjects. Dong’s ultimate subjects, though, are his audiences ­– now numbering in the millions – and his real search is for common ground across difference; an inspiration for any one of us.”

Stories from the War on Homosexuality

(includes Coming Out Under Fire, Family Fundamentals, and Licensed to Kill)

With the DVD release of Dong’s first video collection, however, it is now possible to see Dong not just as a committed activist filmmaker, but a plain-spoken visionary Cassandra at the bridge, armed with a camera. … The supplements are superb. Each disc contains reading lists, study guides for teachers, lists of research and policy groups, an interview with Dong and up to an hour of deleted scenes and interviews. The set even isolates the musical scores (by Miriam Cutler on Licensed to Kill, and by Mark Adler on the others) on separate tracks. From a filmmaker as thorough as Dong, one would expect no less.

The films are engrossing and socially important works, and in this collection heaps on the extras to boot: deleted and additional scenes and interviews, new follow-up interviews—one with Licensed to Kill serial killer Jay Johnson, who sports a John Waters mustache, and informs us that in prison murdering a homosexual is considered a “cool” crime—musical selections, and listings of resources and liner note booklets worthy of classroom discussion. A filmmaker of undeniable integrity, Dong performs film magic act by blending highly personal issues…with an open perspective towards his compelling on-screen subjects.

Stories from the War on Homosexuality charts a timeline of intolerance that leads directly to recent national debates and panicked legislation denying the right of state-sanctioned marriage to lesbians and gay men. The impressive booklets for each film in Docurama’s DVD set include contextualizing essays by Chris Bull, Washington correspondent for The Advocate, lists of national and regional lgbt support services, and suggested further readings; the DVDs feature useful extended or new interviews and added scenes.