“This is unbelievable and I thank Warner Bros. for helping me tell my story to the world and let the world know what happened to my country.” 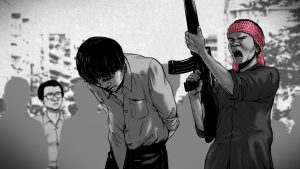 When Dr. Haing S. Ngor was forced into labor camps by the Khmer Rouge, little did he know he would escape four years of torture and be called upon to recreate his experiences in a film that would earn him an Academy Award®. For the Chinese-Cambodian doctor, “Nothing has shaped my life as much as surviving the Pol Pot regime. I am a survivor of the Cambodian holocaust. That’s who I am.” And little did anyone know that some twenty years later, Dr. Ngor would be gunned down in a Los Angeles Chinatown alley. How could it be that he would survive the tyranny of the Khmer Rouge, only to be murdered by gangbangers in America? 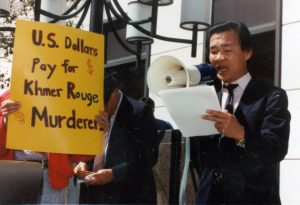 The Killing Fields of Dr. Haing S. Ngor opens with a shot panning along stacks of irregular cardboard boxes in a musty Long Island basement. Sophia Ngor, niece and surrogate daughter to Dr. Ngor, and family friend Jack Ong rummage through the cases, which contain the slain physician’s last remaining possessions. From there, we embark on a journey that traces Dr. Ngor’s remarkable life – from rice fields in Phnom Penh to Oscar® gold in Hollywood. At a time when The Killing Fields (1984) movie would be the world’s first wake-up call to the horrors of the Khmer Rouge, Dr. Ngor used his Hollywood celebrity status to become the de facto “face of Cambodia” and commanded global attention to the devastation of his homeland. From 1975 to 1979, the Khmer Rouge’s social experiment to transform the country into a communist agricultural utopia caused the deaths of some two million Cambodians who perished from mass starvation, forced labor, torture, slavery, ethnic cleansing, and political executions. 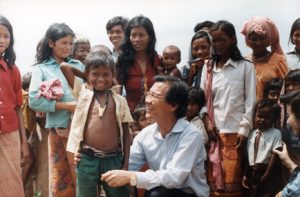 Dr. Ngor was an early and staunch advocate for a Khmer Rouge tribunal, a process that finally began in 2009 and is still mired by political maneuvers. He opened an orphanage in Phnom Penh, built a schoolhouse in his home village, and delivered humanitarian aid to refugee camps. He publicly admonished world governments for ignoring the plight of his countrymen. Ultimately, Ngor’s story is a survivor’s story: of love, loss, and reconciliation – inspired by memories of his wife who died in childbirth while under captivity. 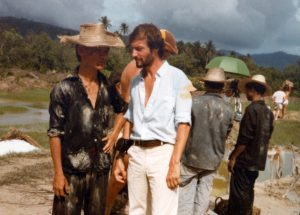 Produced, directed, written, and edited by Oscar®-nominated and triple-Sundance award-winning filmmaker Arthur Dong, The Killing Fields of Dr. Haing S. Ngor is a singular documentary on one of the most well-known survivors of the Cambodian genocide. It uses an iconic movie, The Killing Fields, as a springboard to combine history and biography into a dramatic transnational narrative. The feature-length film fuses animation with the spoken word, interlacing a rich palette of archival material. Anchored by an adaptation of Ngor’s richly layered autobiography, Survival in the Killing Fields (co-authored with Roger Warner), the film serves as a personal indictment of the global politics that were thrust upon Southeast Asia, and the consequences that continue to surface today as Cambodia grabbles with corruption, poverty, and the impunity of aging former Khmer Rouge leaders still at large.

The Killing Fields of Dr. Haing S. Ngor was supported by funds from the National Endowment for the Humanities, Cal Humanities, the Sundance Institute/John D. and Catherine T. MacArthur Foundation Initiative, and the Center for Cultural Innovation.

An animated scene from The Killing Fields of Dr. Haing S. Ngor. Illustration by Yori Mochizuiki.

Director Roland Joffe and Dr. Ngor on the set of The Killing Fields. Courtesy the Dr. Haing S. Ngor Archive. 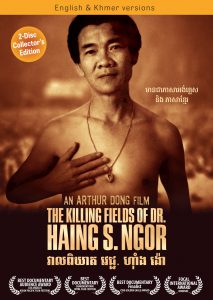 Arthur Dong paints a moving personal portrait of a wealthy doctor who found fame after surviving the horrors of the Khmer Rouge by weaving archival footage, animation and harrowing footage.

GRADE A. Gripping biography of Oscar winner. Ngor’s story of survival, perseverance and love ­– for his country, its people and his wife – is touching, in a way uplifting, and, ultimately, sad. It couldn’t have been better told than it is in “The Killing Fields of Dr. Haing S. Ngor,” a film that needs to be seen as both a biography and the story of genocide and political upheaval in Cambodia decades ago that continues to impact the country today.

The Killing Fields of Dr. Haing S. Ngor is Dong’s attempt to tell Ngor’s life story and that of Cambodia’s troubles through Ngor’s own words. To do this, he utilizes Ngor’s autobiography from the 1980s, archival footage and photographs, some helpful animation and entrancing narration: Ngor’s nephew, Wayne Ngor, who also survived work camps in Cambodia, speaks as Dr. Ngor.

The controversy around [Ngor’s] death—and the remarkable achievements of his life—are charted in The Killing Fields of Dr. Haing S. Ngor, a film made last year by filmmaker Arthur Dong.

Intimately captures the legacy Ngor leaves behind, a human face behind one of the world’s worst genocides.

Arthur Dong’s documentary is all the more touching for being so intimate, down to the simple, understated animation used to illustrate Ngor’s life. The few interview subjects consist of Ngor’s niece and a family friend, while his nephew reads narration taken directly from Dr. Ngor’s own powerful memoir, a book written to ensure the horror his country endured would never be forgotten.

Incredible story from the killing fields of Cambodia to the red carpets of Hollywood.