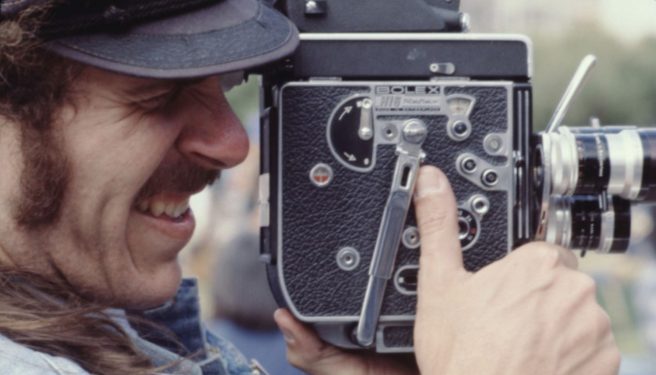 San Francisco: 1970 was a heady year for me. The ’67 Summer of Love, followed by the ’69 Stonewall Riots, led to a new kind of freedom and I was high. Public, my animated film that skewered the normalization of violence and oppression, won the California High School Film Festival. Takahashi, a trendy gift shop notorious for its young gay clerks, hired me at $2.16 an hour. I moved into my first apartment, living amid low-income families, trans people, sex workers, drug addicts and the homeless in a shared $125 per month Tenderloin studio. I was 16. And I met Artie Bressan.

September 14 (or it might have been the 15th or 16th since I clustered dates in my diary): Artie was introduced to me by a Takahashi co-worker who was dating both Artie and myself. He had long hair then, perhaps tied in a ponytail, but maybe I’m thinking of Harvey Milk — the two had similar looks.

Artie (we called him “Artie,” not “Arthur”) and I shared ambitions for independence in filmmaking. Hearing that I was a high school senior, Artie decisively said I should contact Van Halsey, director of admissions at Hampshire College in Amherst; surely I’d be scholarship material. Newly opened, Hampshire was a progressive, even experimental college that bucked traditions and allowed students to shape their own curriculum. That sounded good to me, so I sent Halsey a print of Public with a cover letter.

September 27 (or the 24th, 25th or 26th): I don’t recall who exactly was there, but a group of us got together for a movie night. I showed Public and Artie showed his films, all Super-8. Among his was Boys, a film about two boys, one sexually free and the other bookish, who meet while cruising in a park and then have sex. I wrote in my diary: “I really dug Artie’s films — especially Boys because it’s so much like how I feel and how much I’d like to — and he really dug mine.”

I don’t remember meeting Artie again, and I never heard back from Hampshire College. In 1971, I enrolled into the Film School at San Francisco State University but then dropped out; I tuned in to other desires, but made a self-promise to return to film someday. Meanwhile, Artie’s career flourished, and watching his films gave me a vicarious connection to filmmaking. Looking back, I can see now that Artie’s encouragement and his choice of stories to tell on screen had an indelible impact on me, a young gay filmmaker, at a time when such mentors were absent. Thanks, Artie, for shining a beacon in my heady 1970.